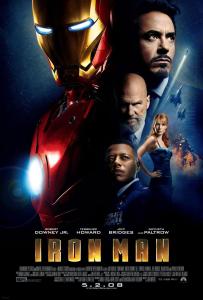 In preparation for Avengers: Age of Ultron, I’ve been watching all the Marvel Universe films in order. And boy, does Iron Man seem so long ago! It came out at a time when a ‘shared’ universe was barely understood. Now, it’s the buzz word for Hollywood. In 2008, all of the major superheroes had had their time in the sun. It was time for the B+ players to shine, and the seeds to be sown for the biggest team up in comic book movie history…

Another comic book film came out In 2008. You may remember it. The Dark Knight, I think it was called. Watch Iron Man and then The Dark Knight. The difference between the two is astounding. The former is light and funny, whereas the latter is gritty and serious. They both deal with terrorists, but in completely opposite ways. Iron Man starts out to the tune of AC/DC’s ‘Back In Black.’ The Dark Knight starts out with a complicated bank heist and brutal murders. In Iron Man, the hero steals the show. In the latter, the villain is the show. As The Dark Knight would be nothing without Heath Ledger as The Joker, Iron Man would be nothing without Robert Downey Jr as Tony Stark.

“Is it better to be feared or respected? Is it too much to ask for both?”

Iron Man is a typical comic book origin story. Man becomes superhero, man learns to use his powers (with humorous scenes of failure along the way), superhero defeats supervillain in a climactic battle. It’s fun to watch, the perfect popcorn movie. An enjoyable way to spend a couple of hours staring at the TV. However, it’s Downey Jr. that makes it memorable. He almost plays himself to become Tony Stark: cocky, arrogant, quick-witted. In the first ten minutes of the film, we get to know him. He’s a “genius, billionaire, playboy, philanthropist,” to take a quote from The Avengers. He’s the CEO of Stark Industries, a weapons manufacturer. Instead of receiving an award, he is at a casino. The awards ceremony gives us Stark’s back story is less than a few minutes. Outside the casino, a female journalist interrogates him. In the next scene, he’s in bed with her. What a guy!

There is little time for brooding or grittiness in this film. Stark’s life is changed at the hands of a terrorist group called the Ten Rings. He’s kidnapped and forced to create one of his own weapons, the apocalyptic Jericho missile. Instead, he creates a prototype Iron Man suit and busts out of there. After seeing his own weapons in the hands of terrorists, he has an epiphany…his company will no longer manufacture weapons! Stark will develop his Iron Man suit to bring peace to Planet Earth! The first half an hour is quite gritty, as the terrorists film a scene of Stark held at gunpoint. It’s dark and gloomy…until he breaks free. Then there’s no time for brooding! It is the definition of light-heartedness.

That comes at a price, of course. Iron Man set the template for most Marvel Universe films; the focus on the hero instead of the villain. The villain is never presented as the hero’s equal, thus, there is no sense of threat. Think of The Joker. He was an ever present danger. Not Batman’s equal in terms of strength, but his superior in terms of manipulation. In Iron Man, the leader of the Ten Rings (is he even given a name?) ends up as nothing more than a stooge of the Obidiah Stane (the real villain). Apparently, a number of Stane’s scenes were cut in favour of Stark’s scenes. That says it all, really. Stane’s motivation for wanting to get rid of Stark is murky. His plans seems stupid and ill-conceived. The impact on the plot is that there is little to it, just a background to the star of the show, Tony Stark. The action scenes are average. The climactic battle is nothing you haven’t seen before in a comic book film. But it’s not about the plot or the villain. It’s not even about Iron Man. It’s about Tony Stark.

(And, of course, the post credits scene still puts a big grin on my face. It set the ball rolling for the Marvel Universe behemoth that shows no sign so slowing down, seven years on. “You think you’re the only superhero in the world?” Samuel L. Jackson’s Nicky Fury asks. The rest is history…)

What did you think of Iron Man (2008)? Leave your thoughts/opinions below!

My Tweets
Join 799 other followers