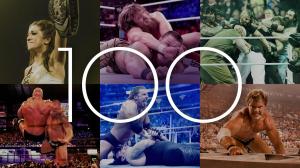 It’s been a while since my last voyage into the WWE Network’s ‘100 Best Matches To See Before You Die.’ I blame the entirety of December and my natural laziness! However, I am determined to finish it before the end of 2016…and I have seventy matches left. Easy! #70 brings us to Dusty Rhodes vs Ric Flair at Starrcade 1985 for the NWA World Heavyweight Championship. It’s regarded as an NWA classic. However, I would disagree with that. Rhodes and Flair put on a good match, but nowhere near the ‘classic’ that many have said.I always think I’m missing something when I don’t view a heavily regarded ‘classic’ film/song/wrestling match as something special. I’ll never understand the adulation for ‘The Sound Of Music,’ for example. Whilst watching Rhodes vs Flair, I couldn’t believe that this was a classic match. There’s much to enjoy, from Rhodes working on Flair’s ankle to Flair’s natural buffoonery, but it lacked that something to push it into the stratosphere. Much like the Flair vs Kerry Von Erich match placed at #90 (read my review here), the match was light on wrestling moves and heavy on strikes. When the strikes consist of chops and Rhodes’ patented elbows, there isn’t much variety to proceedings! There’s one vertical suplex and one clothesline in the entire match.

The significance on Rhodes working on Flair’s ankle did not pass me by; Flair had broken Rhodes ankle in an angle a few months prior to Starrcade 1985. Flair sells his ankle majestically, as does Rhodes about halfway through the match when Flair turns the tables. However, in the closing moments of the match, Rhodes forgets about his damaged ankle and hurls kicks at people with the ankle without any visible pain. Also, the previously broken ankle doesn’t seem to bother Rhodes in the early stages of the match. Let’s have some realism here: he only broke his ankle two months before this match! 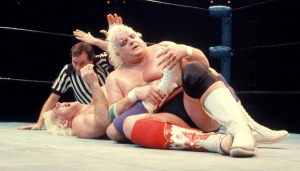 There is a lot of enjoyment to be had in this match. With the passing of Dusty Rhodes last year, it’s always good to watch him in his prime. The crowd loved him back then, and the charisma oozes out of his pores. Flair plays the heel like no one else. There’s nothing wrong with the match, but nothing overly great about it either. It’s watchable, but not one I’d return to watch in a hurry. However, stick around for Rhodes’ celebration on the mike: he was a master of talking! You can’t help but get carried away with his excitement!

VERDICT: 6/10. Not a classic by any means, but a decent and entertaining match. Worthy of the list? I don’t think so!