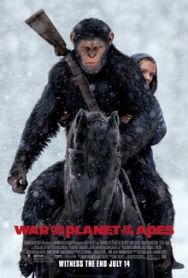 Those expecting a typical ‘war’ film will be disappointed. That’s my first point. I’d compare it to the expectations of Drive. People thought that would be an action movie. Someone even tried to sue due to false advertising. Yes, there are battles in this movie. Yes, they are visually impressive. But the war of the title isn’t physical. It’s psychological. It’s the war inside the main character’s head. We’ve followed Caesar, the leader of the apes, since birth. The Caesar of WFTPOTA is war weary. It’s been five years since Dawn of the Planet of the Apes ended, and the apes have been engaged in warfare with the humans. He’s old and cynical, his mind almost shattered by events that happen in the first half an hour of WFTPOTA. His quest for revenge is the heart of the film, and we follow Caesar into his heart of darkness.

I’ll be honest: it wasn’t what I was expecting either. Two major battles bookend the film, but in between those we follow Caesar’s path of revenge. The first battle at the start of the film mirrors the start of Dawn. Instead of apes stealthily hunting deer, its humans stealthily hunting apes. These humans are part of Alpha-Omega, an army led by The Colonel (played by Woody Harrelson). So, it’s part Western, part-war, part-revenge film. Caesar wants revenge on his own, but his two faithful friends Maurice and Rocket follow him. The other apes head towards ‘paradise,’ a bountiful area that could be home. But Caesar doesn’t want paradise. He wants The Colonel.

Let there be no bones about it; this is one of the bleakest films you’ll see this year, let alone this summer. I doubt I’ve seen a 12A film as bleak as WFTPOTA. From references to slavery, to concentration camps, to Trump’s Wall, it’s unrelenting in its darkness. Some apes have joined the humans. We see one of the apes whip another ape. Yes, some of the visuals maybe a little on the nose, but sometimes you need to be punched in the nose to realise you’re being attacked. The tension, ramped up by the score and the long periods of silence, only increases the sense of bleakness. There’s moral ambiguity aplenty.

Of course, with so much bleakness, there’s some occasional levity, most derived from Bad Ape, a new companion for Caesar. He provides genuine moments of laughter in a character that could have become Jar Jar Binks. But, like its predecessor, the moments of humour come before a moment of horror. Think of Koba, providing laughs by acting like a normal ape before gunning down two humans. Most blockbusters do things the other way round; have a moment of seriousness and ruin it with a quip afterwards (think of the MCU, for example). Here, the moments of horror are made all the more unnerving by the preceding humour.

But, more than anything, this film is about Caesar. Does Caesar’s quest for revenge make him any better than Koba? His ghost haunts Caesar, sometimes almost too literally and unnecessarily. But hate drove Koba to distrust humans and kill them. Hate drives Caesar’s desire to kill The Colonel. War makes monsters of everybody. Caesar falls into that trap. Our sympathy in Caesar is tested, but never fades away. That’s helped by both his character and the motion capture work by Andy Serkis. His face often shows, rather than tells us, the conflict in Caesar’s soul. Of course, WETA should get every award going for digital effects. Within the first few minutes of the film you forget you’re watching CG effects. The apes are as real (if not more so) than the humans. Apart from a little girl Caesar and company pick up along the way and The Colonel, the humans are one dimensional.

As for The Colonel, he’s more of a necessary villain than a complicated antagonist. Yes, his back story may explain his psychotic nature a little, but his screen time is limited. Harrelson plays it well, and plays up the small parallels between himself and Caesar, but there’s no doubt that this is Caesar’s film. It’s comparable to an MCU film, actually. The villain has limited screen times, motives that make his character a shade of grey, but that shade of grey has limited exploration. The film is about the hero, not the villain. Unlike Dawn, there are no likeable humans. There are apes on both sides of the fence (the apes who aid the humans are ambiguous characters), but the humans are bad humans. Our sympathies are with the apes (If this film does lead to a Planet of the Apes remake, who will we support? The apes or the humans?).

Our sympathies are tested, but I also found my patience tested towards the end of the second act. The plot isn’t as tight as that of Dawn, or even Rise. Sometimes it meanders, focusing too much on Caesar’s introspection rather than pushing the narrative forward. There are also some plot turns that lead nowhere, or point to an obvious conclusion. In the third act, a few conveniences seem all too convenient. They are hinted at, but they do feel like a writer writing himself out of a dead end.

However, the above flaws are easily forgiven. For an intelligent, soulful, dark, and emotional summer blockbuster, you’ll be hard pressed to find one better than WFTPOTA. It’s stirring and gripping, dripping with tension. The war of the title may not be physical, but the two battle scenes are beautifully realised and brutal. The villain of the piece, The Colonel, may not have enough screen time, but he hovers over the film as a human being as his most primeval, out for survival above all else. But our journey is with Caesar, and it’s a powerful, almost Biblical journey. He’s out for revenge, and we’ve seen revenge treated across many films. But never as strongly as more in depth as WFTPOTA. It makes the reboot/prequel Planet of the Apes trilogy one of the strongest trilogies in cinema history.

VERDICT: 9/10. WFTPOTA is a fitting end to a trilogy that surprised everybody. It’s bleak, no doubt about that, but also a visceral and necessary viewing. A few flaws knock it a few notches below the quality of Dawn of the Planet of the Apes, but they’re easily ignored. The film of 2017 so far.

What did you think of War for the Planet of the Apes (2017)? Leave your comments below!