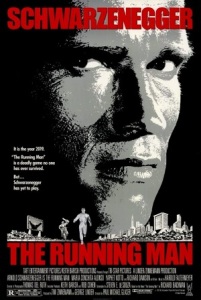 So I see that The Dark Tower has been released on DVD today (in the UK, anyway!). Instead of watching one of the worst reviewed Stephen King film adaptations ever, I went back to an old favourite of mine: The Running Man. It’s thirty years old this year and was adapted from The Running Man by Richard Bachman…who turned out to be a pseudonym of King’s. The funny thing is that the film takes place in 2017. It’s fun to compare and contrast with the future of the 1980s to the reality of today. But is the film as good as I remember? Or have I had my mind decayed by nostalgia for the heyday of 1980s cinema/Arnie? Let’s talk about it…

Like I mentioned, the film takes place in 2017. The opening scroll tells us that the world economy has collapsed, a police state rules with an iron fist, and TV is controlled by the state (to subdue the masses). The Running Man is the most popular show in history. We read that “when high-tech gladiators are not enough to suppress the people’s yearning for freedom…more direct methods become necessary.” We open with Arnie in a helicopter disobeying orders to shoot down innocent civilians. He’s overpowered, his colleagues shoot the innocent civilians, and Arnie (Ben Richards) is blamed for the atrocity. Thus, he’s thrown into The Running Man…where he is a runner trying to escape the “stalkers” in a massive arena.

“I’m not into politics. I’m into survival”

Bets are taken on to which stalker will kill the runners first. We see most of the population mesmerised by this brutal reality TV show. There’s the fake news repeatedly seen, from the fake footage of Arnie shooting on the civilians to the later fake death of Arnie. As one man comments early on in the film, “the truth hasn’t been very popular lately.” So basically the 2017 of The Running Man is a little like our 2017. Of course, the world economy hasn’t collapsed and the US isn’t a police state just yet. But there’s enough news about fake news and plenty of reality TV shows to keep the people quiet and subdued. I mean, come on, it’s 2017 and Strictly Come Dancing/The X-Factor are still on our TVs. Why is that? Who keeps watching these brain cell killers?

From that point of view, it’s interesting to watch The Running Man, to compare and contrast it to our reality. However, I think it’s time to admit to myself that The Running Man is not a good film. It may not be a strictly bad film, but it’s at best mediocre. Yes, the concept is intriguing and inviting, but it’s quickly turned into a vehicle for Arnie action and quips. Yes, like most 80s Arnie film, the quips come thick and fast and serve to strip what meagre tension there is in the film. Arnie’s one-liners kept me from drifting off/looking at my mobile phone, in hope of something more entertaining than this drivel. They are a laughable distraction, but at least they give the film some replay value. Because little else does.

For an action film, it’s a poor outing. The direction and editing plunge the action scenes into boring, hard to follow bouts of men grunting at each other. The ‘stalkers’ look ridiculous, and 80s vision of the future full of glitter and sharp edged costumes. None look like a threat to Arnie. Yet again, any tension is dissipated by these non-entities. The only one who could pose a threat is Captain Freedom, played by Jess Ventura, but he doesn’t even fight Arnie! They have silly names and equally silly special powers, but everything seems to serve Arnie’s strongman persona and his quips. But if a man is dressed up in flashing lights only for Arnie to shout “Hey, Christmas tree” at him, then I guess it’s worthwhile. One saving grace is Richard Dawson’s Damon Killian, the host of The Running Man who is the true villain behind the scenes.

“Hello cutie pie, one of us is in deep trouble”

The main problem is that it’s an Arnie film, and we know that everything will turn out alright. Yes, it’s a dystopian nightmare, but that vision is diluted by the need to stroke Arnie’s ego/follow the blueprint of an 80s action film. We know that Arnie will get the girl (yes, a forced romance subplot drags the plot further down) and the credits will roll, cuing a chessy 80s pop anthem (This is no game…). There is a lot of subtext/on the nose dialogue about the state controlling everything the people see/hear. When the state controls the news and entertainment, how can you tell the difference between the two? There isn’t here. The people are enthralled by The Running Man, baying for the blood of “criminals.” Of course, most of the criminals are dissenters, punished for their yearning for freedom. Arnie is a victim of this punishment, but we know he’ll never be in any true danger. Because it’s Arnie!

And that is one of the main reasons for this film’s failure to entertain any more than occasionally. But another problem is that the film strips down King’s novel to it’s bare essence, leaving aside the grittiness and darkness of his tale in favour of 80s style dance choreography and Arnie quips. The latter may be timeless, but the former are certainly not. The Running Man is a film ripe for a remake, a remake closer to the true dystopian vision of King’s novel. They may have to adjust the ending for it’s similarity to a real life terrorist attack, but there’s no better time to remake a film about fake news and reality TV, is there?

But I’ll leave you with this quote from Damon Killian: “This is television, that’s all it is. It has nothing to do with people, it’s to do with ratings! For fifty years, we’ve told them what to eat, what to drink, what to wear… for Christ’s sake, Ben, don’t you understand? Americans love television. They wean their kids on it. Listen. They love game shows, they love wrestling, they love sports and violence. So what do we do? We give ’em what they want! We’re number one, Ben, that’s all that counts, believe me. I’ve been in the business for thirty years.”

VERDICT: 5/10. The Running Man serves only to be a poor vehicle for Arnie’s muscles and quips, forgetting that it’s a dystopian film. It’s an action film without compelling action, a thriller without requisite thrills. But it’s Arnie’s quips that keep the film going (even if Arnie himself is one of the main reasons for The Running Man’s failure to entertain).

What did you think of  The Running Man (1987)? Leave your thoughts/comments below!