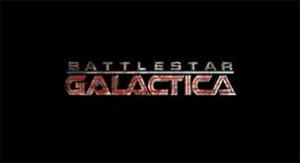 I’ve been thinking of Battlestar Galactica  and thought I’d write a broad review of it as a whole (without spoiling anything for anybody!). Now, I’ve heard it said that Battlestar is merely “sci fi rubbish.” You couldn’t be more wrong. There’s nothing wrong with science fiction if it’s adequately executed. It’s a genre that can easily explore novel ideas and philosophical concepts without being too overbearing, pretentious, or downright boring. One movie that springs to mind is Total Recall. It turns the philosophical problem of identity into a two hour thrill ride, with over-the-top violence and great dialogue. It’s a perfect layman’s introduction to the problem of identity. Battlestar Galactica is a cornucopia of philsophical ideas, as well as televisual excellence.

Regardless of title or genre, Battlestar is one of the greatest TV programme of the modern era/all time. And I invoke the Shakespearian dialogue purely because a rose by any other name would smell as sweet. If Battlestar Galactica was not called Battlestar Galactica, and not a science fiction programme, then people would fall over each other praising it. This happens often with The West Wing (being one of those TV programmes that you have to see, and you are judged as stupid if you don’t). “Oh, it’s only sci fi trash, how can it tell us anything about the human condition?’ I hear the middle class scream. It can’t possibly be worth anything, because sci fi is no better than pulp fiction. That’s where their pretention deprives them of a fantastic TV series. For sci fi, especially Battlestar, can consider issues without being bound by reality, and can deliver excitement and philosophy in equal measures.

So let me give you the basics of Battlestar. Humanity has spread out across the universe and colonised twelve planets. They created robots (called the Cylons), which eventually became self-aware and war started between the two. It ended in a truce, but twenty years later, the Cylons break the truce and destroy most of humanity. The Battlestar Galactica is the only military craft left, and along with the last remnants of humanity, they go in search of a place…called Earth. Oh, and these Cylons have created humanoid Cylons, which are exactly like humans (so the issue of what it is to be a human, can artificial life be human, is considered). Of course, so far, so sci fi: machines turning against their makers, outer space colonies, etc. But bear with me.  I have never known anything as gritty, witty, dark, ingenious, thrilling, pulse-pounding, and brilliant as Battlestar. It makes other modern sci fi look like, well, the old Battlestar. It’s not held back with pointless, unnecessary and plot-shaving sci fi dialogue (which drags modern Doctor Who down, often full of empty plots filled with silly words). There are no stupid, fake-looking aliens in it. There are almost no absurd pseudo-sci fi plots involved. Almost all of the sci fi staples are deliberately held back. As a result, it feels so…so real, in a sense I can’t properly vocalise.

The CGI is awesome for a TV series. While some of the effects are dodgy, the whole thing has a unique but beautiful aesthetic quality to it. Nothing has that artificial, reality-sapping sheen to it (apart from the Cylons, which is forgivable.) I could write an essay about how well sculptured and scripted the characters are, consistently and throughout the series. All stereotypes are met, but with tangible human qualities. No one feels like a mere plot device to point at some characteristic or another. Gaius Baltar is simply a revelation of a character, a very handsome young chap. I could write a thousand love poems about the beautiful female Cylon, Caprica 6. Most important, however, is the story. These characters are placed in an impossible situation, and almost every plot line and circumstance plays on this fact. There is often no easy way out, and the good guys often come off as the bad guys.

Now, I’m sick of this modern trend for no clear delineation between good and evil, but the premise of Battlestar demands this blurring of morality. In the miniseries that sets the picture, Adama is faced with an impossible situation. A cruiser makes a sudden return to the fleet, but doesn’t respond to any calls. In fear that it’s been hijacked by Cylons, Adama orders for it to be destroyed, possibly killing many civilians. It has so many brilliant themes and plots that I can’t possibly go through all of them, but one immediately springs to mind…but no spoilers be here!

In a show such as the West Wing, both sides of the story would have been covered, but in a way that subtly manipulates you to the “correct” (read liberal/left wing) opinion. This makes its point without being overly sympathetic to the ‘terrorists’, painting both Cylons and humans in a negative light. That’s where its main strength lies, mainly because it is a science fiction programme. It can comment on modern day life and politics without being too obvious or preachy. Religion is a main part of the whole series, with President Roslin’s devotion to Scripture a constant reminder of what blind faith can do to a person. The clash between this blind faith and Adama’s belief in the supremacy of the military is never more apparent then when he sends a squad to arrest her, in fear that she’s endangering the human race.

I can’t hope to completely convey the magnificence of Battlestar. It encompasses everything that science fiction can do, and even more. It set the bar so high for science fiction TV. Pick a topic, from politics to religion to the military-industrial complex, and Battlestar has probably taken it on. It’s a more accurate description of modern America (even possibly the modern world) than any other TV series. Of course, it often wears its politics on its sleeve, but displays them in a way that the viewer can readily disagree with them. Unlike, say, the West Wing, which presents supposedly ‘impossible situations’ (I’m thinking of Qumar, the 24th Amendment plotline, Israel etc), but the answer is so glaringly obvious (and so, so liberal) that it’s like a smack in the face.

It’s funny that Baltar says at the very end of the series that the human race needs to go ‘beyond good and evil.’ Now, Nietzsche was a syphilis-filled proto-fascist Nazi racist repressed homosexual, but he had some good ideas. And Battlestar exemplifies this approach to storytelling. You’re often led to feel sympathy for both the good guys and the bad guys. Sympathy for the Cylons is elicited because they were rejected by their makers in the most violent fashion, and their attempt at genocide is a childish stab at revenge. They’ve been betrayed by their God/parent, in essence, and react in the way a child would: violence. It is almost perfection.

Battlestar Galactica the correct way to do a reimagining, and popularised the ‘dark’ approach to remakes that’s never been matched since (and is getting pretty boring now.) It escapes its sci fi shackles to become a truly great TV show, not just a great sci fi show. It takes you on an edge-of-your-seat adventure one moment, and the other brings you down for a heartbreaking ending. It can be political turmoil one moment and then depict religious notions for all to see. The fact that it’s not anchored to reality gives a enormous leeway in terms of storyline. If you like the West Wing, then this is the ideal programme for you. Please, forgive the title and the science fiction background, and allow Battlestar to take over your lives for a couple of months. You won’t regret it, joining the last of humanity in their search for Earth.

Click here for my overview of 24: It Will Make Your Day