Tomorrow night, WWE Raw celebrates twenty five years of being on the air! In celebration, I’d thought I’d do a Top 10 List of Greatest WWE Raw Moments! I didn’t really start watching Raw until 1999, but I’ve perused the WWE Network for what are generally considered major moments in Raw history. However, most of the following list will be compiled of moments I saw live. You can watch a moment out of context, but it doesn’t mean much. Watching Raw on a weekly basis (which I pretty much did from 1999 until a few years ago) means that I have some great memories! So here’s my Top 10 List! 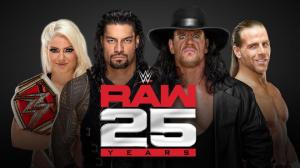 I don’t really watch Raw (or Smackdown) any more. I just read the results and watch PPVs. However, I did keep up (in visual terms) with the friendship between Kevin Owens and Chris Jericho. They were the most entertaining thing on Raw and Smackdown by a country mile. You knew something was wrong, but like any great segment, they teased out the tension until the twist…Owens had a gift for Jericho: a new List! But Jericho’s own name was on THE LIST…and Owens beat down Jericho, even smashing his head into the Jeritron. Yes, it’s been done before, but the breakdown of this particular friendship was truly heartbreaking.

This list could be full of moments involving Stone Cold and McMahon. However, this (and the beer truck attack…further up the list!) stand out as epitomising the madness, excitement, and sheer balls-out excitement of the Austin Era. Stone Cold interrupted Vince McMahon’s championship coronation with…a Zamboni! He stopped it outside the ring and lept onto a shocked McMahon. Security, Undetaker, and Kane couldn’t stop the wild Austin. It had a veil of realism, wrapped up in delicious craziness.

Mick Foley was the guy WWE relied on to take massive and daring bumps. He’d put his body on the line countless times. But did the top brass think he was good enough to win the WWF Championship? On Raw 3.1.1999, Mankind had his opportunity for the title against The Rock. However, it was a pre-recorded episode of Raw…and WCW Nitro was LIVE. Eric Bischoff announced that Mankind had won the WWF Title! Yes, he spoiled it for everyone. But instead of turning people off Raw, Bischoff made them tune into Raw to see someone win the WWF Title who had earned in through blood, sweat and tears. Yes, the people loved Mankind/Mick Foley, for all he had put his body through over the years. This was his moment.

It’s the road to WrestleMania 27. The Undertaker’s coming off two phenomenal Mania matches against Shawn Michaels (retiring him at Mania 26). Who could Undertaker face next? His return had been hinted at for weeks before the 21.2.11 Raw. On that night, he returned…but who interrupted his return? HHH! After stern looks and trademark gestures, the match was set for Mania 27. Phenomenal visual storytelling!

Punk and Cena fought in the main event of Raw 7.6.2010, but who remembers that? People only remember the debut of the Nexus. Nexus consisted of seven disgruntled contestants from the awful show that used to be NXT. They turned up, beat up John Cena, and then destroyed anything and everything. The ring, the announce table, the outside mats…and Daniel Bryan choked an announcer with the guy’s own tie (for which he was fired afterwards). Of course, WWE would squander the Nexus’ potential, but for one night they left viewers with our jaws on the floor.

For me, this pips another Austin moment to the post (at #9)…but this is also another memorable pitstop in the Austin/McMahon feud. Austin drove down to the ring in a beer truck and proceeded to douse the Corporation (McMahon’s group!) with beer! This was the week before Austin would take on The Rock for the WWF Championship at Mania XV. And how else would you build a main event than having Austin come in and wreaking havoc? Watch out for Vince attempting to swim through the beer…a classic moment!

I was a huge fan of HHH in 1999/2000. After his injury in early 2001, I was gutted. His return was set for Raw 1.7.2002, after a series of vignettes showing him rehabilitating (to the tune of U2’s Beautiful Day!). My anticipation built for almost two hours until Triple H’s music hit the speakers…and boy, was the ovation massive! Just watch it on Youtube…it’s overwhelming! Babyface HHH was OVER! He battered Kurt Angle in entertaining fashion afterwards. I recorded the Raw, and the moment I kept rewatching was HHH’s music blaring out and the fantastic ovation. Superb!

For me and many others, this was a vindication of our support for Daniel Bryan through thick and thin. He’s one of the most popular wrestler of the modern era, with a career cruelly cut short. But here, everyone loved him. The crowd had literally cheered him into the WrestleMania main event and this was the pivotal moment in Bryan’s ascension to said main event. For over half an hour, Bryan “occupied” Raw, surrounded by “fans.” Seeing him finally getting one over Triple H and Stephanie McMahon was glorious (and even though Stephanie usually makes me turn my TV off, here her inclusion was paramount). One of the most rousing moments in Raw history.

Is this the best promo of Raw in the 21st century? In my humble opinion, yes. After a weak beatdown of John Cena, CM Punk walked up the ramp, sat down in his Stone Cold shirt, and took down the company that had made/was making him millions. Vince McMahon, Cena, John Laurinaitis, the mechanisms behind the WWE…no targets were left outside Punk’s fourth-wall breaking pipebomb (well, apart from bullying. Because bullying doesn’t happen in the WWE! Honest!). It’s a promo you didn’t want to end.

My adolescent fascination with WWE began whilst watching WrestleMania XV. After seeing Stone Cold Steve Austin win the WWF Championship, I was hooked! Of course, I remember The Rock and Austin feuding over the title (including great moments like The Rock throwing Austin’s custom belt into a river), but one moment I’ll always remember from my early months of watching WWE was The Undertaker/Stephanie McMahon Dark Wedding. The Undertaker had kidnapped Stephanie, and in the main event slot of Raw, he took Stephanie (strapped to a cross) down to the ring to marry her. The Ministry fended off any would-be heroes in a situation that squeezed every ounce of tension until we heard glass smashing…and Austin ran down and saved the day! Stephanie hugged him, he didn’t hug her back, Vince ran down to the ring…but Austin didn’t do it for Vince. Or Stephanie. He did it because it was the right thing to do! That moral has stayed with me forever!