“Whatever happens, it’s gotta be better than this!”

Another reboot/sequel/prequel hits the screens from franchise born a long time ago has hit our screens. Already this year, we have had upgraded versions of Mad Max and Jurassic Park. Now it’s the turn for Terminator, a franchise that should have died after Terminator 2. I’m not saying Terminator 3 is without its merits, but it wasn’t necessary at all. At least Terminator: Salvation did something different. Terminator: Genisys attempts the rebooted Star Trek trick of establishing a different timeline for the franchise. However, it avoids the streamlined nature of the rebooted Star Trek and comes up with an incredibly convoluted storyline that is at once over-explained by the cast and impossible to follow! It also raises the most number of questions in a time travel film since X-Men: Days of Future Past…Get ready for the second worst entry in the Terminator franchise! END_OF_DOCUMENT_TOKEN_TO_BE_REPLACED 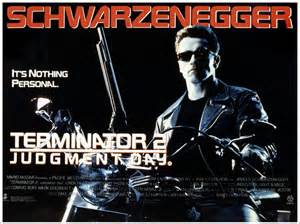 It’s one of those debates that will rage on until Skynet becomes self-aware and obliterates mankind: which film is better, The Terminator or Terminator 2: Judgment Day? In my humble opinion, it’s The Terminator. The Terminator is a film that literally cuts to the chase; a rough and ready films that starts the action/thrills from the beginning and rarely lets up. It also has the more horrifying villain in the shape of the T-800. However, that is not a knock on T2. They are films of a similar quality, and that quality is sky high. T2 is the film James Cameron wanted to make when he made The Terminator. T2 follows a similar storyline to The Terminator, but with more detours, spaces for breath, one-liners, awesome action scenes and emotional character development. A little bloated, but still a vital and brilliant film. END_OF_DOCUMENT_TOKEN_TO_BE_REPLACED

“Nice night for a walk”

There are films that, if you are part of my generation, define your childhood, such as Jurassic Park. There are also films that may define your childhood in spite of their Rated-R nature, such as Total Recall. The first two Terminator films were as much a part of my childhood as the Power Rangers or Hero Turtle toys. That being said, how can I possibly review The Terminator (a film that I must watch at least once a year) without being twisted by my childhood memories. My answer was to watch it with my fiancé, who has never watched it before. Seeing a thirty year old film through someone else’s eyes (not literally, of course!) was not the answer, however. The Terminator will always be one of my most-loved films of all time, regardless of the criticisms she threw at it! END_OF_DOCUMENT_TOKEN_TO_BE_REPLACED

My Tweets
Join 797 other followers