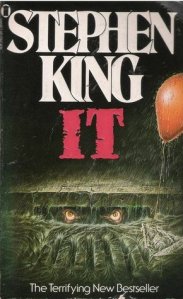 “Everything down here floats”

I’ve just read Stephen King’s ‘IT’ for about the tenth time. Ever since I laid my hands on it, in a school library at the age of fifteen, I’ve reread it every few years or so. I had been a fan of Stephen King since the age of seven or eight, but had never gotten around to read ‘IT.’ However, I stumbled upon ‘IT’ in the school library. A half-baked memory arose from staying over at my grandparents and watching the TV movie based on the book. I could hear a clown saying something about floating. I remembered showerheads attacking a weedy little kid, a blood bubble bursting in a pipe, and a massive spider. So I immediately picked up the book and began to read it (and, funnily enough, I finished the book in my grandparents house!).

‘IT’ celebrates its 30th anniversary this year, so I found the old, yellowing book on my bookshelf and began to read it. “The terror, which would not end for another twenty eight years…” The opening paragraph grabs you attention before you’ve finished it. All these years and rereads later, I’m still spellbound for page 1. It’s a huge book, clocking in at 1116 pages (in fairly small print as well!). Sometimes, the length of the book can be felt, but I’m usually too caught up in the book to feel the heft of it in my hands. It’s an ugly cliché, but ‘IT’ feels like an old friend as soon as you open it up.

We follow two timelines in the book. 1957/1958, when the ‘Loser’s Club’ (consisting of Bill Denbrough, Eddie Kasprak, Beverly Marsh, Ben Hanscom, Mike Hanlon and Richie Tozier) confront and defeat the evil ‘IT,’ (otherwise known as Pennywise the Dancing Clown, Mr. Bob Gray, or the Eater of Worlds…Yes, that’s where Bray Wyatt got that phrase from!) who’s been terrorizing the place of Derry, Maine for centuries. ‘IT’ feeds on children’s worst fears and literally feeds on their bodies. However, they never killed ‘IT,’ and the monster returns in 1985. The Loser’s Club reunites to confront ‘IT’ and hopefully kill it once and for all…

“A word from the wise, from your friend, Pennywise”

Now, let’s get some of the widely-held criticisms out of the way with first. Yes, it’s a huge book. King could have done with an editor, someone to tone down his verbiage. There are sections (the fire at the Blackspot, for example) that add little to the plot. His descriptions of people, places, murders and feelings sometimes stretch out into absurdity. Why use ten words when you can use one word, my English teacher used to say. Minor characters get backstories that lead into nothing. Everything is fleshed out, even when the excess is unnecessary. There are other places, oddly, where an inappropriate verb or adjective seems shoved in to make the sentence sound pompous and intelligent. King obviously had a thesaurus nearby and occasionally consulted it. In the last part of the book, the tone changes from horror to something ethereal, and blend of science fiction and fantasy.

However, these flaws (and a few others that don’t spring to mind at the moment) are part of its greatness. Even the bloat and excess is made entertaining and intriguing by King’s prose. There are a lot of valid criticisms thrown King’s way, but I could never say his writing isn’t enthralling. ‘IT’ is an incredible piece of world-building. The fictional place of Derry, Maine is as much a character as the seven main characters. The history of Derry, mostly given in diary form by Mike Hanlon, and the structure of Derry is described with intricacy and devotion. King must have spent months planning out Derry’s layout and marking down pivotal points in the place’s history. At times, it feels more like a history book instead of horror fiction, but that’s crucial to the book’s greatness.

The seven main characters are given a personality, history and physical description just as vivid as that of Derry. We read about the ‘Loser’s Club’ during their childhood and their adulthood; the former adds layers to the latter. They feel like fully developed people (possibly with the exception of Stan Uris). Due to King’s love of descriptions, most of the minor characters also feel well-developed and ‘real.’ Everything and everyone feels tangible, and it’s a credit to King. Not only that, but ‘IT,’ the villain of the piece, is a horrifying threat right from the start. All heroes need a worthy villain, and ‘IT’ understands people’s deepest fears. The latter part of the book may rob ‘IT of some mystery and threat, but only a little.

Look past the bloat, and King is showing off at every opportunity.. He weaves between 1957/1958 and 1984/1985 with ease, as the past mirrors the present (and vice versa) in a virtuoso writing performance. Sentences aren’t finished in one chapter in 1957/1958 and are picked up in the next chapter in 1984/1985. King has a penchant for leaving the reader desperate for more after each chapter, but he was at the height of his powers of temptation here. The thought “one more chapter” is a constant taunt in my mind as I read ‘IT.’ King wrote about ‘IT’ that “I worked on the book in a dream. I remember very little about the writing of it, except for the idea that I’d gotten hold of something that felt very big to me, and something that talked about more than monsters…” I’m sure I’ve read that he wrote the book during his cocaine addiction, but still, his sentiment stands. ‘IT’ is so much more than a horror novel.

‘IT’ is a coming of age novel. It’s about children facing a threat that would drive an adult insane, but a threat that resurges in their adulthood. Nostalgia tints every page. It makes me reflect on my own childhood in a way that no other book has the power to do. Childish innocence must be broken at some point for the adult within us to flourish, but a part of our childhood always remains, sometimes hidden, sometimes not. As adults, the Loser’s Club have forgotten the horrific events of their childhood. But they slowly remember them, as we sometimes remember a feeling or a smell associated with our childhood. The bittersweet ending always brings a tear to my eye, especially the last line. When I read the last line in my grandparents’ house, at least fifteen years ago now, I hurried to the toilet to cry. I always fear that one day I’ll read ‘IT’ and find it tedious. But I haven’t so far.

‘IT’ is Stephen King’s magnum opus, magnificent in spite of its flaws. He’s at the peak of his writing ability (and the peak of his ego, probably, which explains his demand that no one should edit his books). Yes, on the surface, it’s a horror novel, but it is about so much more. It’s about childhood innocence, the transformation of a child to an adult, how childhood can scar us more than we’ll ever know, how evil can flourish if good people stand aside, how childhood friendship is a magical thing that cannot be replicated as an adult…it’s about all that, and more. If I could only read one book for the rest of my life, it would be a toss-up between this and Dostoevsky’s ‘Notes From Underground.’ I’d advise reading a few other King books before tackling this epic, just to get accustomed to his style. But read ‘IT.’

VERDICT: 9/10. Stephen King wrote his best book in ‘IT.’ Yes, it’s flawed, but that’s part of its beauty. A book that weaves between timelines majestically and explores nostalgia, the magic of childhood, and the drama of growing up with an immediacy that will make you consider your own childhood.