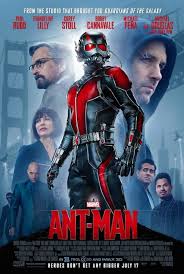 “Don’t let your past determine the future”

It’s a wonder that Ant-Man is on the big screen at all, after its difficult development history and change of directors. But, the Marvel Universe machine is relentless, ploughing through any obstacle that is in its way! Edgar Wright’s name still looms large over the whole thing, and many reviews seem to focus on what the film would have been like if Wright carried on as director. However, the ‘what if,’ while intriguing, does not shed any light on the end product. Ant-Man came to the screen in spite of his departure, and that’s what we’re left with, at the end of the day. And we’re left with a fun, enjoyable film, but a film that shares the flaws common with most films of the Marvel Universe.

Of course, Ant-Man is not a superhero familiar to the general public (or to myself), so much of the enjoyment came from the ‘unknown’ factor of the superhero. He can shrink to the size of an ant, but what else is there to Ant-Man? Or should I say Ant-Men? Michael Douglas plays Hank Pym, the first Ant-Man and creator of the ‘Pym Particle,’ the particle that enabled him to shrink. He shelved the Pym Particle and Ant-Man in 1989 to keep the technology from being weaponised by SHIELD/evil people within SHIELD. In the modern day, however, the villain Darren Cross has taken over Pym Technologies, and is unlocking the secret of the Pym Particle. Pym recruits burglar/guy with a masters in electronic engineering Scott Lang (played by Paul Rudd) to become the Ant-Man and stop Cross…

Marvel, after doing a war film, a science fiction film, a 70’s conspiracy thriller, and a space opera, tackle the heist genre with Ant-Man. Overall, it is a great success. It reminded me of the preparation and heist missions in Grand Theft Auto 5. Simple, easy to follow, but less boring than some of the ‘go fetch something’ missions! Within the heist story, there are themes of redemption (Lang wants to be the hero his daughter believes him to be, Pym wants to reconcile with his daughter). There aren’t any major twists or complications, and everything goes pretty much as you’d expect it to. Lang has a quick training montage to become Ant-Man, failing humorously at the start. But familiarity doesn’t breed contempt, and it’s refreshing to have a Marvel film follow a straight-forward story, without being defined by the fact that it’s part of a shared universe.

Unlike the majority of Phase 2 Marvel Universe films, Ant-Man isn’t hamstrung by the overarching continuity of the Universe. Whilst Pym recruits Lang, Lang asks “why don’t you just ask the Avengers?” It’s a throwaway line, but Pym’s distrust of SHIELD is almost reflected in the film, as apart from the ending and an out of place fight scene, the Avengers references are Easter eggs, rather than plot devices. The fight scene in particular looks out of place and forced into the story. Lang, as Ant-Man, battles a member of the Avengers. The fight is entertaining, and the shrinking/enlarging of Ant-Man gives it a different feel to the usual Marvel fight scenes. However, it immediately takes you out of the film and into the Marvel Universe, which is as distracting as it is unifying.

It’s a film that could easily exist on its own merits, and many merits it does have. Rudd does not seem like an electrical engineer in the slightest, but he’s more than likeable to be a superhero. Whilst not in the league of Robert Downey Jr, he’s at least on the level of Thor. The cast are faultless, with everyone looking like they are having the time of their life. Michael Douglas, in particular, relishes his part. Their enjoyment, in turns, encourages you to enjoy it further. The humour, at times, turns the film almost into a superhero spoof, but there’s always a moment of seriousness to balance it out. I don’t think I’ve laughed so much in a film since Guardians of the Galaxy!

After the boring, repetitive destruction of the action scenes in Avengers: Age of Ultron, the action scenes in Ant-Man takes us down to earth, quite literally. Ant-Man is accompanied by various types of ants on his missions, and they usually take place in mundane places such as gardens. The final battle, between Cross as the Yellowjacket and Ant-Man, takes place on a model railway and involves plenty of laughs around Thomas the Tank Engine. The small size of both the battles and the story itself is refreshing. Rather than skyscrapers being levelled (although we do see Pym Technolgies get the explosion treatment), there a fight inside a falling briefcase, with keys and papers flying about (topped off with The Cure’s ‘Disintegration) playing). It’s an antidote to the massive scale of mayhem seen in most Marvel films (and there’s a spectacular 2001/Interstellar-esque scene towards the end that is perhaps my favourite scene in the film).

However, it’s not all laughs and great action. Darren Cross, or Yellowjacket, is yet again an underwhelming villain. Some of his motivations are unclear, the rest are clichéd. He poses no threat whatsoever, and exists only to set up an obstacle for our heroes. Why can’t Marvel get their villains right? I say this in every review of a Marvel Universe film. The villain should command every second of screen time that he has, even if it is to the detriment of the hero. We need to feel that the villain could defeat our hero. Maybe it’s the fault of Marvel’s style of film, light over dark, snarky over gritty. But we’ve had Loki, who’s second only to Ledger’s The Joker in modern film supervillains. Of course, the first film for a superhero sets up the superhero and his origin story. But we’d care more about his origin if he had to fight an imposing bad guy! But rant over…

Ant-Man’s disposable villain, fortunately, is one of the few flaws in the film. It never takes itself too seriously and it’s one of the consistently funny films I’ve seen in a while. There’s less focus on the over-arching Marvel Universe, which gives the film an easy to follow story without the distractions that plagued Avengers: Age of Ultron, for example. Rudd is likeable as Lang/Ant-Man, and most of the cast have a ball with their character. The small-scale action scenes separate it from the bang and boom mayhem typical of superhero films. On the whole, a success!

VERDCIT: 7/10. Let down only by a poor villain, Ant-Man is an almost Guardians of the Galaxy-like surprise. A simple superhero story heightened by great stories and levity.

What did you think of Ant-Man (2015)? Leave your thoughts/comments below!